I remember there was a time in my life when I’d shudder at the word cunt. It seemed dark and dirty, a slur, a nasty put down, the very worst thing you could call somebody.

It is a hard sounding word too, with its c and t – it’s usually prefixed by the word fucking. You Fucking Cunt.

I remember the look of horror and eye rolling from my mother if it was ever said in a film. I can’t remember it being used on TV much back in the day. I think it seemed to be a very Scottish or East End of London insult. A Ray Winston sound.

As I grew into womanhood, I became fascinated with the word. I’m not sure if it was simply trying to rebel or whatever, I started saying it, probably to elicit a reaction. My own mum died when I was 27, whilst I wasn’t that young, she seems to have been painfully young at only 50 to die. I remember using the word cunt a lot during that time.

Fury and desolation. It seemed that in this dark time of my life, only cunt would do.

It became part of my every day language but it was rarely used for my actual cunt. That seemed taboo somehow. A cunt too far.

I went to watch a production of Eve Ensler’s the Vagina Monologues a few years after my overuse of cunt began and was absolutely shocked at its apparent neglect of the word. For the majority of the show cunt was blatant in its absence. I started to feel angry. Why would the writer leave out cunt?

It seemed like the one true word to me. The one cunt to rule them all.

Then all was explained. The monologue, Reclaiming Cunt, began and felt like an awakening for me.

Cunt was now an empowering word in my life. I used it proudly, not just as an insult but for joy and a compliment. I started using it in my love life and my sex became raunchier, sexier, more womanly. I embraced my cunt along with the word and felt myself blossom.

And now, I see this word seems to becoming into a new bloom of its own. It is certainly still used in a derogatory insulting way at times (sometimes calling someone a cunt is the only way) but it is also being used by women to describe the indescribable. Vulva doesn’t quite mean all the bits of your genitalia but neither does vagina. Pussy comes close but not quite as close as cunt.

First showing up in the 13th Century, cunt was used it as a rather ordinary name for the female genitals. Indeed in the Middle Ages when streets were named after the activities which took place there, one such place in London was Gropecunt lane where sex workers went about their business. In fact, someone started a sadly, unsuccessful, petition in 2017 to reinstate the street name which was common in most towns in the medieval times. The last known use of the name Gropecunt Lane was in 1561. If you’ve read The Millar’s Tale by Chaucer – one of the Canterbury tales, while bawdy, it didn’t seem to be considered obscene to use cunt at the time. Though according to this article, Chaucer’s cunt, there is a debate around whether he used cunt as much has been reported.

By the time Shakespeare came along the word seemed to fall from favour—only to be hinted at in comedic texts—often disguised in the word ‘country’—so it could be deduced that the spectre of censorship was looming. It was. So where did it all go wrong for the cunt? Well, Christianity and censorship my friends. It is no coincidence that it was around this time that the first laws banning sexually obscene material came into force. In 1662 the licencing act banned the publication of literature deemed offensive or contrary to the Christian faith.

From 1795-1961, cunt was not seen in any English dictionaries! Imagine that. Though it did appear in 1785 – Grose’s Dictionary of the Vulgar Tongue just ten years prior.

Robert Burns, a favourite of mine, is known for his bawdy poems but it wasn’t until after his death in 1796 that some unpublished works were discovered in a locked drawer. They were only made available to the public in the 1960s. What did these songs contain that kept them hidden for over one and a half actual centuries? You guessed it, cunt. I love this poem that formed part of the collection.
Nae Hair On’t

Yestereen I wed a lady fair,
And ye wad believe me,
On her cunt there grows nae hair,
That’s the thing that grieves me.
It vexed me sair, it plagued me sair,
It put me in a passion
To think that I had wed a wife
Whose cunt was out o’ fashion.

Imagine that! When a hair-free cunt was a disappointment! How times change.

So the fact that these cheeky rhymes were kept locked up gives more evidence of the word falling into ill repute.

When the rise of Christianity took hold, so did the shame and abhorrence to sex in general. Virginity and chastity were to be aspired to and cunt became relegated to the filthy impure recesses of bad humanity.

And there it seemed to remain until very recently.

DH Lawrence with his Lady’s Chatterley’s lover certainly shed some light on sex and the word cunt – first published privately in Italy in 1928 it wasn’t available in the UK until 1960! When of course it caused an absolute scandal and its publisher’s, Penguin were the subject of an obscenity trial. They won and the book became a legend and quickly sold 3 million copies.

Look here—two cunts in one line!

In art and fiction, even now, I feel that cunt can cause a reaction. I remember the first time I read Atonement by Ian McEwan, I was positively giddy when I read the line, “In my dreams I kiss your cunt, your sweet wet cunt.” And that was first published in 2001! 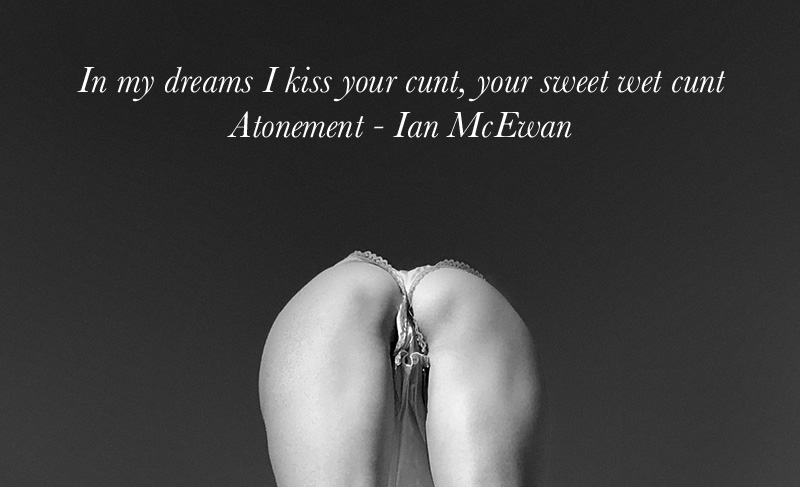 And my favourite ever opening line of a book, is from The Sexy as Hell trilogy co-authored by our very own Lily Harlem.
It begins,
“Lick my cunt.”
Absolutely sensational.

It has the power to lift the most mundane sex scenes into something gloriously edgy and hot. Women using the word to voice their desires and making no mistake about the focus. It can add an air of dominance to the moment.

Cunt still thrills me. Everything about it.

When making plans, it’s always fun to say, “See you next Tuesday,” and get knowing eyebrow raises from some, and utter obliviousness from others.
There still seems to be a certain subversiveness surrounding the word. I guess part of me enjoys that. I love that there are still occasions when it causes a frisson of horror. It is still a term kept for best, or special. The mic drop word. Still known as the C bomb.

Does this play into the vulva being a thing of mystery, something to be a little scared of?

Something that has a real potent power, unpredictable and terrifying to behold? Or should we just embrace the fact that’s it’s still a naughty word? I have friends who have normalised it, to the point where they would not have a problem with their small daughters using the word as a correct term for their vaginas, where others would be horrified.

It’s still a word with the power to shock—think of the scene in Kickass where Hit Girl, as her name suggests, a young girl who is an assassin says to a room full of grown-ups that she is about to murder, “Okay, you cunts, let’s see what you can do now.”

In many ways, violence has become so normalised that it is this word that causes the pearl-clutching, not the fact that a child wielding a naginata can wreak graphic death and destruction on her enemies.

Would you believe the first entry of the word cunt into the Mirriam Webster dictionary is in 1972! And the definition still calls it a vulgar term.
This is the exact definition from the Oxford English Dictionary:
“cunt”
NOUN
vulgar slang
1 A woman’s genitals.
1.1 An unpleasant or stupid person.
Origin
Middle English: of Germanic origin; related to Norwegian and Swedish dialect kunta, and Middle Low German, Middle Dutch, and Danish dialect kunte.”

(I recommend clicking to hear the correct pronunciation, childish, perhaps, but fun.)

Does still labelling it as a vulgar word can make it feel like the cunt itself is a vulgar thing? Is this damaging at a time when we are striving so hard to shatter this taboo and take ownership of our cunts and bodies?

As Kate Lister from Whores of Yore states in her wonderful article, A Nasty name for a Nasty Thing: a History of Cunt,  cunt is the OG of the fanny nouns – “Cunt is not slang; cunt is the original. So, cunt is the godmother of all words for ‘the monosyllable’ (1780)”

After reading up on the word cunt, I am determined to use it even more. Reclaim it as the perfect term for the perfect collection of parts that make it up.

It’s becoming ever easier to find objects to celebrate the cunt too, from earrings to crockery, there are lots of ways to declare your love of the word. Take these teacups from Outlandish Creations with ‘Bunch of Cunts’ emblazoned across the delicately painted china—described as a new kind of ‘friendship bracelet’ to unite your inner circle of bad bitches. I can feel an order coming on! In fact, if you type cunt into the search bar on the craft site Etsy, you may be overjoyed (I was) to find over 74 pages of cunt themed delights. It seems that to call someone a cunt has already become an affectionate term among friends.

I certainly relish the fact that I already use it liberally in my fiction and lucky for me, I get to use it in my non-fiction too. Hooray for the cunt!

Further reading on the history of cunt.