Yes, yes, I know, I’m very behind with Lex — but just in case you, too, have been in a place where you haven’t been dating, or if you haven’t known which apps to try, this is a recommendation to check out Lex — even if you aren’t looking to date anyone.

The interesting thing about having met my current partner in 2011 is that I have almost completely missed the rise in dating apps. Yes, OK Cupid was around then, but it wasn’t an app, it was a website. And yes, rife and I have been actively nonmonogamous on and off in our partnership, but the folks that I was dating or hooking up with I kind of just stumbled across, I wasn’t actively looking for dates.

Because rife and I recently moved (and because of some other changes), we’ve been on some apps lately, looking for friends, community, connection (etc). Personally, of all of them, I am finding Lex to be such fun to read and through with to connect with people.

I really wish I’d known about it sooner — and I wish someone had told me that it isn’t just for hookups and dates, it’s also friends and community events.

The idea is that it mimics old school 80s and 90s personal ads in the back of queer newspapers. Do y’all remember those? Did you ever see them? I first knew about them in 1999/2000 in Seattle, through the Stranger newspaper (now online, famously run by Dan Savage, and often highly critiqued). I put up a couple of those ads, myself … I have no idea what they said now, but they were extremely short, and you had to get a code to call in to a voice mailbox and listen if you had any messages. I don’t think if I ever did, nor did I reply to anyone else’s. Though I read them, diligently, often. 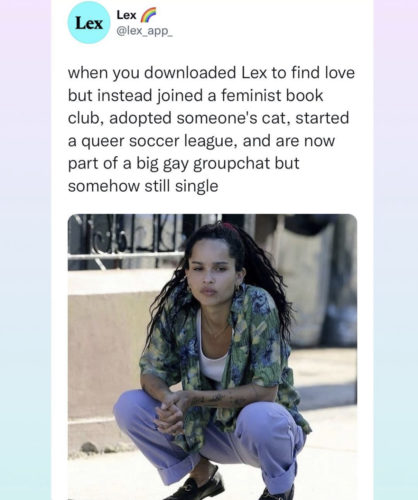 In addition to hookup ads, there were housing ads, general queer community questions, and even posts that read more like journal entries. This, as you might imagine, also has quite a bit of backlash and critique, of folks saying that they should take it to Livejournal. I have mixed feelings about it — but generally, it feels like a new form of social media to me even, and I am still observing the culture and ways to engage.

Lex is specifically geared toward nonbinary folks, trans and cis women, and other identities that are not cis men. I learned this through posts on Lex about it — people who were discussing generally the policy in their posts. I have seen some gender theory, some posts to dog sit or house sit, ads for housing, looking for hangouts and watching shows and playing D&D together. Plus — tops, take note — lots of bottoms looking for tops, which has brought me into the ponderings of “what is a top, anyway?” and “are there really more bottoms than there are tops, is the so-called ‘top shortage’ real? Or is something else going on?”.

Look, it’s not perfect. There are plenty of mis-steps and people posting dumb things. But there’s also a lot of really interesting stuff, to me, if you sort through the noise. I realize that I, in some ways, am Lex’s ideal user — I love communicating by text asynchronously, and I really enjoy learning about someone by asking questions back and forth interspersed with some in-person time. I have been enjoying the connections that I’ve made from there, and wishing I’d known that it wasn’t only for dating, it was also for community and connection and friends.

What’s your experience with Lex? Have you had fun with it? Do you hate it?