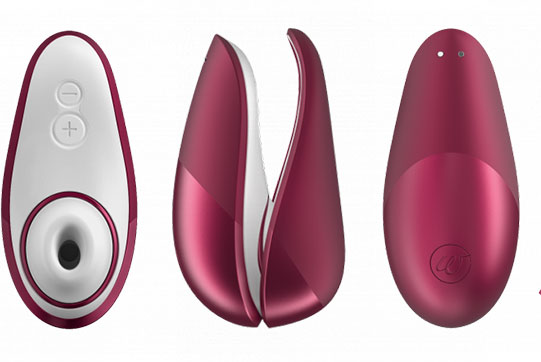 It is better when used with lube so that the seal remains intact during play. The Womanizer Liberty is a small and compact version of the regular Womanizer and has a separate lid which makes fit easily into the palm and is ideal for travel fun. Despite the small size, it has a nice weight to it that gives the feeling of a quality product.

It is certainly one of the most discreet looking sex toys I’ve encountered and the pale blue with silver highlights makes it barely recognisable as such.

It is charged by magnetic USB and has two very easy to use control buttons just below the suction stimulator. At first sight, I thought the buttons might be better on the outer side of the toy as they might be situated too close to the body in their current position but as it happened they were very easy to manipulate while in use.

It came ready charged which is perfect for me as when the mood takes me, I don’t want to wait!

I’ve used suction toys on my clitoris before but always felt like I was missing something—it was never quite the incredible squirtastic orgasmic experience most women seemed to report. I have managed to orgasm from these types of toy before but the climaxes produced were always rather perfunctory. I had only persevered in the pursuit of the climax out of obligation of having received toys in return for review or comment.

I find the suction nozzle a little intimidating and worry that once it has a good hold on my little clit, I might move suddenly or jerk, it will hit against it or dunt my pubic bone and make me cringe—even the thought has me curling up my toes and crossing my legs.

Anyway, I decided to pull my big sex toy reviewer pants on (off) and try something new. I took my Womanizer Liberty into the shower and turned the water to full heat. 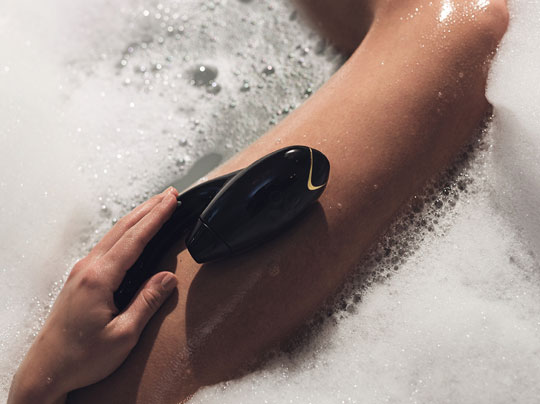 I admit, my head wasn’t quite in the space it should have been so I tried hard to conjure some images to get me in the mood. I looked down to my nipples, the water running over them and wondered if the sucking motion would work on those. I absolutely loved Posy’s article on Nipplegasms and the memory of that elicited a small hope that perhaps this toy could help stimulate my usually insensitive nips.

As I applied the nozzle (not the most attractive word but it describes it perfectly) over my nipple the suction did take hold and the beating, fluttering motion deep within the toy did make me think I might be able to feel something. When I pulled it off my nipple was certainly hard but I hadn’t really felt anything. Or so I thought. It is quite an odd sensation mechanically trying something out that you know ought to be giving you pleasure but your mind isn’t quite engaged.

I then decided it was time to try it on my clitoris. I kind of braced myself as I mentioned above, my clit is small yet mighty and very sensitive to the thought that I might be bruising it. I opened up my labia and carefully applied the nozzle to the tip of my clit making very sure not to brush it the wrong way. After a couple of attempts, I felt it was in the correct position and I tentatively turned it on.

I mentioned before that it is very easy to operate and the placing of the buttons was not impeded by my pelvic bone. Once I felt that the toy was secure, I dared to click through to a higher intensity.

Well, feeling my body suddenly go from zero to, HELLO, was strange indeed, as I usually need a lot of mental stimulation to engage my sexual response. But oh my, my legs were shaking, a welling sensation was building in my clit and radiating out through my whole vulva making me stagger. I held fast, absolutely astounded at how quickly things were going, almost observing my body’s responses in quite a scientific way. I started to shudder all over and turned the motor up full.

Oooft, now I was in the moment! The welling became a feeling of fullness and rising up and up yet deeper and deeper into myself. I could feel the orgasm about to hit when the weirdest feeling of needing to pee came over me, then a huge release of absolute pleasure engulfed me and a gush of liquid left my body.

I turned off the Womanizer absolutely bewildered as to what had just overtaken me. I had been aware of calling ‘Oh my God’ throughout and now stood shaking as hot water and steam cascaded around me.

For pure research and scientific purposes, I will give the Womanizer Liberty another go on dry land to see whether I really did squirt as Coco does here ORGASM SURPRISE. If this little toy can do this without me being mentally turned on, I can only imagine my response while being fully aroused.

I have to mention that when fully charged the Liberty is reported to have 120 minutes of fun time. I think I’ve calculated around 240 orgasms for one charge which is not bad going.

And there you have it! Even if you are sceptical, why not give a toy a go – you can find the Womanizer Liberty and more on our shopping page.